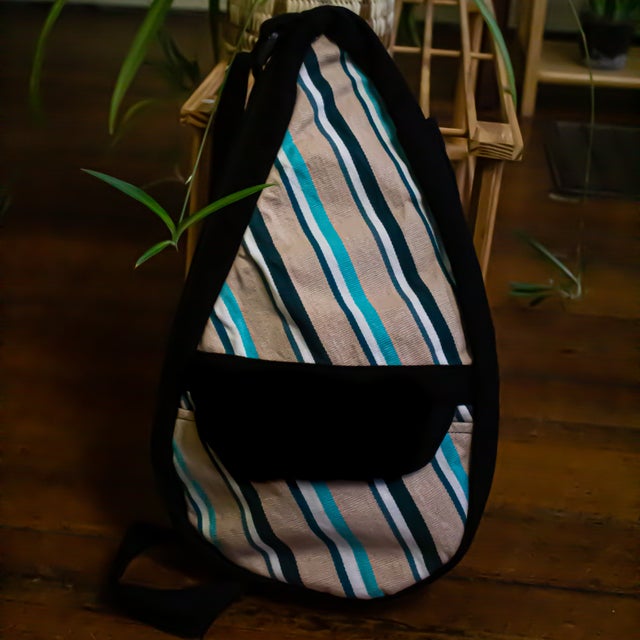 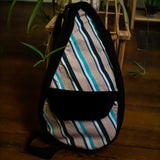 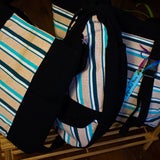 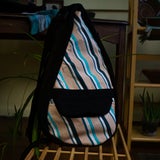 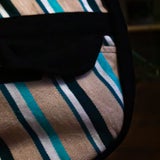 This harp-shaped bag is an update of one of our best-selling bags! Made using fabric woven on the traditional backstrap loom, this bag wears like a sling-back backpack. The fabric strap is adjustable and comfortable to wear. The front of the bag has a velcro flap pocket, and the side has a slip-in pocket. The main compartment is zippered and lined and has a large pocket on each side and a zippered pocket.

This fair trade purse was a collaboration between two artisan groups, Flores de Peña Blanca and Ruth and Nohemi. The fabric was woven by a group of 15 weavers called Las Flores de Peña Blanca (The Flowers of Peña Blanca). The women have been weaving for many years and formed together as a group so that they could help find markets for their products and help provide for their families.

Ruth and Nohemi was founded in 1986 after the bombings in the community of Chontala, near Chichicastenango by a Methodist pastor and tailor. By using the weavingfrom the war widows and by teaching their sons to sew, the whole family benefited. The boys received scholarships to attend school, and the widows received improvements to their homes and were able to send their children to school with their increased income. This group supports several artisan groups and community projects with the profits from the sale of their products.